Recently there has been quite a bit of questions flying across my inbox and chat windows in regards to Taika Seiyu Oyata’s – Nin Tei Shō.  As this has become such a popular topic as of late, I felt perhaps something needed to be published.

For the purposes of this article, I will be altering photographs and documents I have so that nobody can accurately copy the things later on or use them as a basis for forgeries.  We have already had enough forgeries of previous scrolls, most of which were comical failures.  Kanji and Kana represented in this article are not the originals brushed by Uhugushiku Tan Mei, Wakinaguri Tan Mei, or Taika Seiyu Oyata except where notated.

Chronologically, the first reference to a Nin Tei Shō was on 01-01-1947.  It was at this point that Wakinaguri and Uhugushuki combined a document with both their signatures beginning with the kanji for Nin Tei Shō which is equivalent to ANNOUNCEMENT or PROCLIMATION.  Below is an adjusted copy of that document with a few things cryptically adjusted and removed such as the signature chops and placed on a different background.  This was basically a document stating that they were handing down the knowledge of their respective houses to none other than Mr. Seiyu Oyata.  He wouldn’t have trained long with them at this point much more than a year since he didn’t meet them until after the war.

A few of our Kansas City shihan dai were lucky enough to be treated to a viewing of this document at Taika’s home.  The document was regrettably not in the best of shape at the time.  It had quite a few little cracks and creases now but is a wonderful piece of Taika’s history. 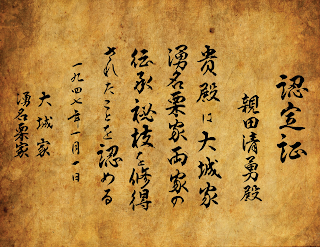 This document is formatted quite similar to the ones Taika released some 63 years later.  The wording is quite similar and it states:

It is then dated and signed by both heads of the two family arts.

Around the beginning of 2009, Taika had lived a lot longer than he originally had anticipated, and as one does you start thinking of the end days.  He had decided to do like his instructor’s had done for him and produce Nin Tei Shō for a few select members of his organization.  He would come to class and talk about it with us, and talk about how very few people would actually get them, and how it would all be kept secret until after his passing, and generally what all it meant.  He had a list of possible candidates but that could change at a moment’s notice.  I do quite believe that this was to be our final carrot, to whip us on and into the future.  Our motivational scroll.

Two of us with some limited Japanese language education in class got to participate in helping him in regards to the project.  He wanted this to be similar to what he received in 1947, but with some added words he felt strongly about.  He wanted to change some wording from what his instructors had given him and was searching for words that we as Americans would understand and that would translate well.  Our help was more or less lots of nodding and helping him understand how one word in English might be taken different ways, but even though it had little bearing on the final product it did give us some extra talking and discussing time with the man which was always welcome.

On 3-10-2009 we were in class working on the edge/edge version of the ‘Naihanchi Crossover’ (blog of its own) and Taika called me up to look at a piece of paper. 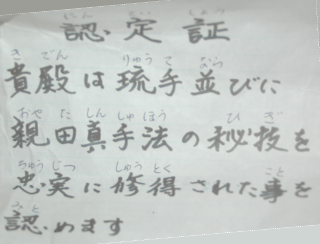 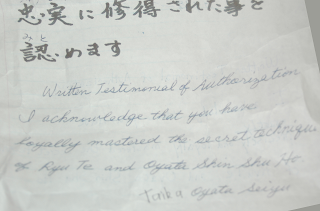 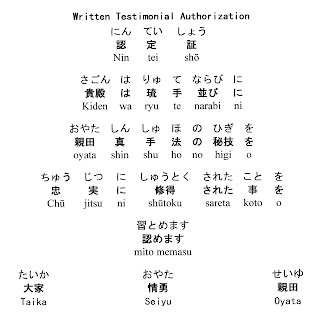 In that early translation, there were a few kanji and kana still missing.  The previous discussion led to him adding the Itsu datsu suru koto naku shown below to the final version which would look similar to this; 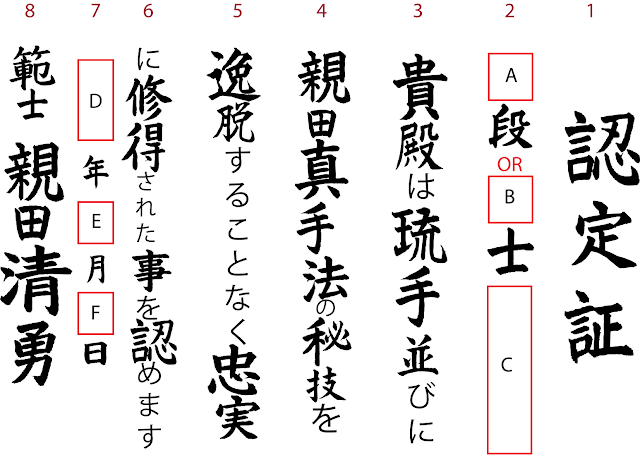 In this final version, most of column five was added;

Let’s now break it down by column, and right to left as it reads.

Column 2 – Rank or Title
Unlike his instructor’s, Taika decided to issue two different scrolls and had them made up with different sizes and formatting.  One would be for a rank proclamation and the other would be for a title proclamation.  Both had distinctly different mon, embossing and borders than ever shown before.  One scroll was near the size of standard rank certificates seen in the past and the other was significantly larger.  All of those little things that would set these scrolls apart from prior generations of scrolls in Taika’s lineage, do not appear in this article or these renderings.

In these three columns, Taika himself translated this earlier meaning which I showed before in my horrid 2009 phone image.

“I, Taika Oyata Seiyu, acknowledge that you have loyally mastered the secret techniques of RyuTe and Oyata Shin Shu Ho.”

The final version was amended to read, “I, Hanshi Oyata Seiyu, acknowledge that you have loyally and without deviation, mastered the secret techniques of RyuTe and Oyata Shin Shu Ho.”

Column 7 – This column merely had the date of the award.  The only pre-printed kanji was for the year, month and day with space above each to place the numerical kanji values.

Column 8 – Hanshi Oyata Seiyu
This final column was of course Taika’s name with the title of Hanshi.  I personally find it interesting that he didn't use Taika.

For those that want to delve a little deeper into the kanji individual meanings, I would recommend investing in the New Nelson Japanese-English Character Dictionary.  It is, in both Tony and I’s opinion, one of the better ones out there for researching.  We have done the leg work for you if you wish to take that step.  The next two images are of a running spreadsheet of each column, and all kanji numbers (how to find them in the New Nelson) are listed on the right.  If there is no number, then it isn’t a kanji it is a kana……which if you have not studied Japanese at all might be confusing. 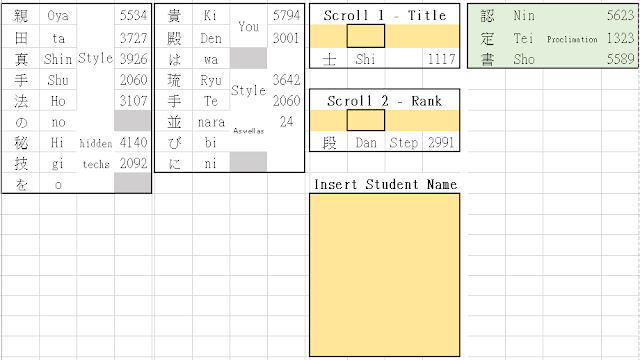 There were three historical Nin Tei Shō in our lineage; one from Taika's instructors and two versions that he gave out to certain people and intended for others.  His stroke was obviously not anticipated and terminal cancer prognosis had given him about three months left to tidy up loose ends like this.  That didn’t happen.

So what does all this mean?  I keep getting asked that question.  Taika’s own words that he wrote (and then added without deviation) says it all.


“I, Hanshi Oyata Seiyu, acknowledge that you have loyally and without deviation, mastered the secret techniques of RyuTe and Oyata Shin Shu Ho.”

Does it mean that certificate bearers are the only ones with Taika’s knowledge?  No.

Were all the ones given out that he intended?  No, the stroke prevented that but a few (more than two) were indeed given.

Were there any politics that were involved?  Yes, in one very specific incident.  It was his main goal to prevent that with this scroll, after being a little disenfranchised with previous endeavors, but there was something that did occur which greatly upset Taika in regard.  I and others may release that info later with friends, and quite a few know about it already but at this point it is just he said, she said muckity muck that doesn’t really matter.  Like any piece of paper, the proof is in the hands and in the heart.

Is it a license to teach or promote under Taika’s name or is it just an acknowledgement of skill once achieved.  The latter.

Does it give the holder permission to grant rank in RyuTe® Ren Mei or Oyata Shin Shu Ho® to anyone?  No.  Nowhere in the document does it give that right and at the time of Taika's death all trademarks passed to his wife.

Does it appoint its holders the keys to the throne?  No. It is a proclamation, a written pat on the back.

Is their only one living person (at the time of this writing) with a Nin Tei Shō?  No, there were more given by Oyata.
Random thoughts by Lee Richards at 12:42

Moderated to prevent spammers who are difficult to Tuite via the web. Your post will be revealed to the world upon verification that you are not a spamming trolling anonymous coward trying to pick a fight behind your keyboard without leaving a name.