The Choke Misidentification Conundrum
Do you suffer from CMC, there is a cure?

Repeatedly, I hear the ignorant masses spouting wrong things about Choke Hold This and Choke Hold That.  Before you feel insulted, ignorance is something we all have.  I am quite ignorant of how to get to the moon or Mars.  I have a general idea but have not fully educated myself.  The math of it all is probably a bit above me.  Being ignorant doesn’t mean I’m stupid, dumb or anything of the sort.  I have just not educated myself on that particular topic.  I am ignorant in a myriad of things including portions of the martial arts, hence my continued study.  There are a ton of people totally ignorant of the difference in a choke and a neck restraint, particularly a carotid restraint.

A choke is an action where you are cutting off a person’s air supply.  Most often in the martial arts, it refers to the action of placing ones forearm across the front of a person’s neck and squeezing to cut off the air supply by pressure against the windpipe or trachea.   Of course it can occur in other ways such as with a bicep, leg, et cetera.  The MMA has made the leg variant popular. 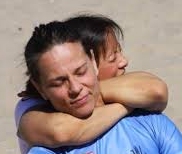 Chokes such as this have been popular for years in movies.  You see them all the time in your favorite spy movies and such.

In today’s society, I cannot fathom a very good reason to teach these other than as a matter of life or death.  Maybe you find yourself in this position and they are stabbing you in the leg or torso with that knife you missed so you crush their trachea…..ok, but in today’s society everyone is going to pick apart how you got in that position to begin with, which is kind of what started this blog tonight.

We teach in our dojo, not to do this.  It is our belief, with years of Law Enforcement experience to back it up, that chokes take longer to incapacitate than carotid restraints take to render unconsciousness, unless you are the Hulk and then, well, it isn’t easy being green.

So what is a carotid restraint?  My classmate does an excellent job here of explaining it:

Why the LVNR isn’t a ‘Choke Hold’

For those either too lazy or under time restraints…..suffice to say it affects the circulatory system, NOT the airway.  And note that LVNR is a trademarked SYSTEM of instruction used to apply a carotid restraint.  The NLETC has a long and impressive track record of training police officers to use carotid restraints throughout the world without cases of death or serious injury.  They are meticulous in their approach and training and that is why agencies all over the world use them.  What?  But the media has you to believe that these things are banned by all law enforcement because of the danger.  Nope, quite the contrary….just like a lot of other things you hear online.  If it is so dangerous, then why are there no cases of death or serious injury with its use in over 50 years of agencies using this system as well as 130+ years of Judo tournaments?

The easy way to spot the difference between a choke and a carotid restraint, as the two sets of pictures above and below show, is that in a choke (above) the controlling and damaging mechanism is across the front of the throat.  That is a bad thing.  In a carotid restraint (below), the elbow is in front of or in close proximity of the chin.  This PROTECTS the airway.

Who’s at fault for this confusion?

The media is part of the problem, but we as martial (life protection) artist are the main source of the problem.  A vast majority of us for decades have confused the two when discussing them.  They may look similar to the naked eye, but they are completely different things.
BLOOD CHOKE: And for those using Blood Choke as their vernacular for this or the Rear Naked Choke...you need to stop that as well.  Go back and look at the Japanese (kanji) and you will see it in no way translates to the word choke.  Wrong word brought back to English speaking countries by gaijin (foreigners) who had a few months in country and learned very little Japanese.  It is wrong.  It is incorrect.  Just because your sensei's sensei who served a few months on an island said it, doesn't change the fact that it is a poor and completely incorrect translation. Blood Choke came about when martial artist began getting their vernacular corrected but refused to give up the word choke, so once again they couldn't admit they were wrong and just added the word blood to the front. Again, nothing is choked off. The supply of oxygen enriched blood slows but does not cease unless you use a Marie Antoinette guillotine.

What can you do as a fellow artists? - Change your nomenclature!

Stop calling things the wrong thing.  Even though for years you have heard certain things called a choke, if they are not a choke as previously defined, stop doing it.  Review all your handouts, web curriculum, and fix it.  Start correcting anyone you hear say it wrong.  Do it now!

Tackles:  The other thing is there are commonly confused ‘take downs’ that are used by law enforcement, security officers, et cetera that at first glance appear to be either a choke or a carotid restraint.  These are in fact tackles that start by encirclement of the area around the neck but should not really have any pressure.  Of course these can be dangerous as well as a dog pile ensues or as the two or more ugly masses pile to the ground.  The death of Eric Garner in New York started as a tackle where the officer appears to be trying to drag Garner down with his forearm on the carotid side of his neck.  Garner is larger, taller than the officer.  I’m not going to further arm chair quarterback that event but when they go to the ground the arm appears to be across the front of the neck for 4-5 seconds before the officer switches to other tactics.  Whether there was direct pressure on the trachea at the time or the officer was trying to re position, is a debate I won’t get into.  That is beyond the scope of this blog.  The party was able to breathe as he was still able to talk and the medical examiner concluded that no damage to Garner's windpipe or neck bones was found.

Another Case in Point:
Below is a very typical web news site and can you spot the problem here?  The elbow is directly below the chin.

Is this a choke or a carotid restraint? - Absolutely correct, it is a CAROTID RESTRAINT.

Can the person breathe?  YES, perfectly well, though he will most likely be taking a nap shortly. Maybe even snoring.

Video – For those that want to watch more of this, I’m not going to debate the several issues that led up to the decision to use this but I will say that fundamentally, there is nothing wrong with using this technique to restraint this individual.  I have actually done a rather detailed research of this incident and others to which I completely side with the orange shirt.  The drunk needed to go and refused all previous reasonable attempts to comply.  Don’t forget that the media only showed a portion of the video and that the person who filmed it only started filming it once it had escalated to a level that caught his attention and he subsequently remembered he had a video recorder on his phone.  The problem that ensued is that the uneducated masses that were there immediately assume the security guard is killing the person.  They wrongfully make that assessment because they are uneducated and then begin interfering which presented a danger to the carotid participant.  The carotid participant was in absolutely no danger until the idiot super vigilantes stepped in. 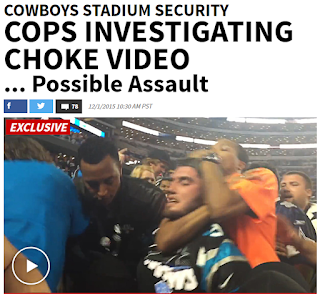 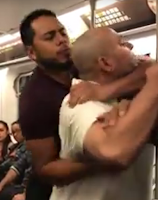 Here is the video LINK that showed up today in my timeline that caused this blog.  Now, the video cuts off and we can debate other things in this video like what led up to it and such, but that is a different topic for another blog.  The main thing I want to address is;

Is this a Choke or a Carotid Restraint?

Well, up until the video ends, the elbow is directly under the chin.  This was a very close quarter’s encounter on a subway.  We actually practice in tighter areas like a city bus and I can tell you that it took a little bit of skill to keep that elbow where it was.  A few people accused this practitioner of just learning this from watching MMA videos.  If he did, he is a quick study.  He did a real good job of getting that elbow under the chin and keeping it there during this short, tight encounter.  Debate the other things to your hearts content, but this is very much a Carotid Restraint.
So what is the difference in the incorrectly labeled Rear Naked Choke and the LVNR® that is practiced by most Police Officers? In the above technique the practitioner has their chest square to the back of the opponent.  The  LVNR® requires the officer's arm-pit over the subject's shoulder. Why is this a major plus? It makes the arms, because they are farther forward, longer in comparison to the technique done on the subway. Depending on size, approximately 4" longer arm length in relation to the neck. A longer arm, thus longer lever, ensures even more distance from the trachea and ensures that this technique does not restrict the airway of the opponent. Both are carotid restraints, but the LVNR® is just safer.

To sum up tonight’s blog, it is our task to correct our own vernacular and nomenclature as well as help to educate the public.  Do not let the uneducated public and the muck stirring media continue to disparage good techniques by calling them bad things.
Random thoughts by Lee Richards at 21:05

Moderated to prevent spammers who are difficult to Tuite via the web. Your post will be revealed to the world upon verification that you are not a spamming trolling anonymous coward trying to pick a fight behind your keyboard without leaving a name.